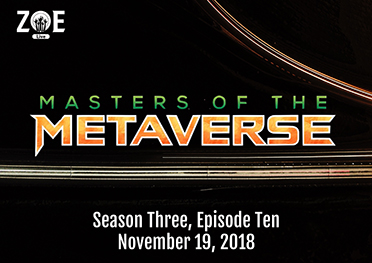 Last Monday, things got a little more animated. Reunited with Jenika, Thomas, Crash, and Aquamarine head off into Canada with Bruno and his sentient winnebago. As they travel, they learn that Patric obtained not only plans for metapods from an anonymous source, but a thumb drive as well. This thumb drive can only be opened by Thomas (who does so), revealing a letter from none other than TOM. TOM asks Thomas for help in his efforts to save the metaverse, telling him that a great disaster is coming. The only way to stop it is to collect various anomalies throughout the metaverse.

The rest of the team discuss this information and question Patric further about his anonymous source. Patric informs them about Project: Metaverse, the assault on the island facility, and the involvement of Cole. Upon hearing this name, Crash has a very visceral reaction, but won’t say much more than that Cole is a “bad person”. Thomas is very concerned about the existence of TOM and Project: Metaverse, and is not convinced that what they are tasked to do is in their best interest. The others insist that the only way to find out is to get into the pods and travel to the next metaverse. Thomas agrees and gets in, but not before setting a search running on any information about TOM, Project: Metaverse, and Jebediah Lexington.

Leaping into the metaverse, the team finds themselves in the anthropomorphic bodies of Captain Kitt Foxman and his crew. They seem to be part of a show called “Galaxy Tails”, complete with narrator and commercial breaks. In fact during the commercial breaks, the pilots are unable to access the thoughts and memories of their avatars and have to wait for the show to start again before they can connect again. In the course of their adventures, the Galaxy Tails crew encounters Admiral Sliss of the Chameleon Empire, as well as a strange object: the metal, non animated logo of Titan. They safely retrieve the logo and defeat Admiral Sliss, returning to Mamalon Prime for a well deserved break. Their rest is interrupted by terrible news: The Young Adult Non Genetically Modified Turtle Ninjas have stolen the logo and disappeared! Who can stop them? Clearly, only Capt Kitt Foxman and his intrepid crew!