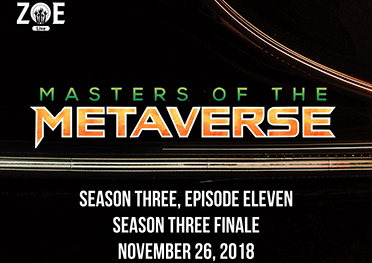 It’s Monday – that means it’s Metaverse Day! Join us tonight at 6PM PT for the season three finale of our original RPG livestream, MASTERS OF THE METAVERSE, exclusively on http://twitch.tv/zombieorpheus!

Last Monday, the crew of Galaxy Tails headed off in search of the mysterious object. They received word from the Planet Dojo about a great martial arts competition. Sojourn is tasked with choosing an apprentice via any method she chooses. She does so thanks to the power of Mac and Cheese, video games, and missing stuffies. Kitt is chosen as the apprentice, much to Presto’s chagrin, and the crew finally arrives on Planet Dojo.

Once there, it isn’t long before the crew finds themselves in a fight with the Non Genetically Modified Young Adult Turtle Ninjas. The two sides are fairly evenly matched and the fight is eventually broken up by the local mole rat militia. During the welcome dinner, the team takes their leave in an effort to track down the missing object which is believed to be somewhere on the planet. The tracker devised by Professor North eventually lead them into the sewers where they once again are confronted by the Turtle Ninjas. In the midst of the fight several canisters of knock out gas are thrown onto the scene and the avatars pass out, just in time for a commercial break.

The team awakens on their way into a Chameleon Empire dungeon, in the arms of the monitor lizard soldiers. Kitt Foxman expected this all along and had a plan – so everyone is only pretending to be asleep and Kitt launches into an attack, joined shortly by the rest of his team. The monitor lizard guards are soon replaced by two extremely large alligators. These humungous lizards are no match for Kitt Foxman and his crew. The fight soon turns in their favor, as the object is finally located nearby. However, in the course of the conflict, the containment shield has been damaged and a red glow is beginning to emit from the mysterious object. Kitt Foxman picks it up, and the crew rush to their ship to make a hasty escape.

Once back aboard their vessel, Kitt is surprised to find that his paws are now furry and no longer made of paint. In fact, he is able to wipe the paint off of the walls nearby, exposing the lack of atmosphere outside. Presto hits the turbo as the crew races off – with Admiral Sliss on their heels. All seems lost as the crew flies into an asteroid shield. Presto sheds to armadillo shell as the ship goes full possum for a final desperate burst of speed. It seems like they are about to escape from their pursuers when a giant space squid looms into view in front of them.