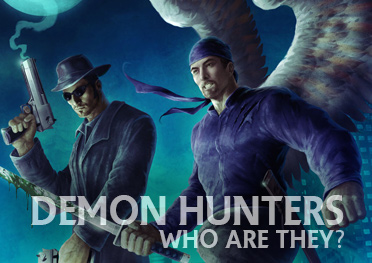 Demons are real. So are angels, werewolves, vampires, and manic pixie tank girls, but demons are the worst of the lot. That’s where Gabriel, Silent Jim and the rest of a clandestine supernatural black-ops unit come in. These are the Demon Hunters, and they are pretty ok at their job.

In 1998, a group of students at Pacific Lutheran University wrote and filmed their first movie, Demon Hunters. From that mega-low budget movie, first distributed on VHS tape during finals, the Demon Hunters cinematic universe was born. Over the last nineteen years, it has spawned a film sequel, Dead Camper Lake, a webcomic, two role-playing games and – most recently – a digital series, Demon Hunters: Slice of Life.

While characters swing in and out of the series over its long run, the primary story focuses on a disgraced Demon Hunter team based in the Pacific northwest: Omega Fifteen. Led by Gabriel, the only survivor of the mysterious and disastrous Vancouver Incident, and his enigmatic partner Silent Jim, who did not survive the Vancouver Incident, Omega 15 is the bottom of the barrel for the Demon Hunters and the Brotherhood of the Celestial Torch. They are joined in their fight against evil by Wolf, the human war machine, Rigor Mortis, the recovering vampire, Albrecht, the resident werewolf, Bijou, the thanatologist, and the ever-present Cipher, a living computer.

The Demon Hunters universe exposes a shadowy supernatural world filled with every imaginable horror, myth, and legend in all of human history. Standing in their way is the Brotherhood of the Celestial Torch, a secret society of warriors for good, fighting to protect the world from the evilest of evils. With chapters placed all around the world and throughout recorded human history, the Brotherhood has, so far at least, prevented demons, knowable and unknowable horrors, and other dread dangers from beyond our world from destruction.

The Brotherhood’s counterpart is the Order of the Infernal Scepter, an even more secret group of evil-doers bent on world domination through any means necessary. Infiltrating the Brotherhood under the guise of loyal agents, the Order works to undermine and destroy from within. Between the demons working to ravage the planet, your standard monsters tearing their way through the general populace, and the Order trying to use the chaos for their own ends, the Brotherhood has its hands full.

Over the years, Dead Gentlemen Productions has expanded the Demon Hunters universe to include new characters, villains and events, fleshing out the world in which Omega 15 and their counterparts exist. The original film is told through the eyes of Chris Wiener (pronounced Wee-ner, despite his protestations), a hapless student dragged into this new world when the demon Duamerthrax appears on campus, slaughtering indiscriminately and possessing the body of Chris’ fiancee. Saved by Omega 15, Chris must follow the embattled team, trying to rid the world of the dread demon prince.

Over the lifetime of the series, the villains have changed, but the primary story remains consistent: Omega 15 works behind the scenes to save the world from the supernatural crises, often cracking wise in the process. From the first moment we meet Chris Weiner on the PLU campus to the latest RPG incarnation, A Comedy of Terrors, Demon Hunters brings the pain and the clever to what can be overwhelmingly dark in the wrong hands. Thankfully, Gabriel, Silent Jim and the rest are on the case. We ride!