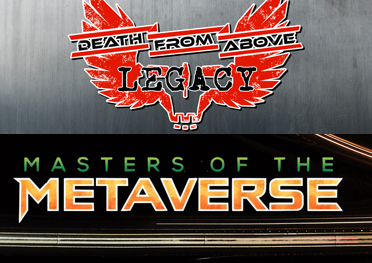 First up is DEATH FROM ABOVE on Saturday, February 9 at 1PM PST. Our Battletech-inspired RPG has just kicked off its brand new season, making it the PERFECT time to jump in! Last week, the remaining Aces discovered a traitor in their midst. This week, we go back to the Jade Falcons and the ones we’ve lost. Join cast members Matt Shimkus, Sarah Sanders-Ode, Kesan Holt, Tammy Nguyen, BJ Altman, Chris Ode, and Steve Wolbrecht as we embark on another episode of stompy mech action!

On February 11, it’s Metaverse Day! Join on Monday at 6PM PST for the latest season four episode of our original live streamed RPG, MASTERS OF THE METAVERSE, exclusively on Twitch!

Trapped in a world of dark magics and elves, the pilots must try to uncover the secrets hidden within. It’s been several months since the events of Galaxy Tails. The pilots are holed up in an abandoned animal hospital, and they’re starting to go a bit stir crazy when Bruno arrives with two hooded figures. Removing the masks, the group is confronted with Rosie and a mysterious man in an orange jumpsuit. Rosie had been on the run, trying to live a normal life, when a kill squad picked up her trail. Bruno and his team intercepted on orders from Nick, and brought her in.

The other man was also on Nick’s shopping list. His name is Ronald Zenda, a serial killer scheduled for execution. But his face doesn’t match the ID photo of the prisoner called Ronald Zenda. Upon talking to him, he reveals himself to be a class four licensed metapilot, hailing from a different Metaverse altogether. He has a great deal of knowledge, especially when it comes to the new metapods. They have all been brought together at the behest of Nick, who claims they are all looking for the same things to complete their various projects. Namely, a metaled (the pilots) and a machine that can siphon items from one Metaverse to another (Ronald).

The group question Ronald further about the various classes of metapilots. For his part, Ronald is stunned to discover that every person standing before him is a Class Five Pilot. It’s impossible as Class 5s are not bred naturally and should never occur in this high a number in one world. Moreover, none of these pilots bear the physical markers of a Class 5 – except that one kid named Crash. The group finally decides to get into the pods and head into the Metaverse.

Once there, they find themselves in a world overtaken by dark magic. The Fae are here and they rule over everything. Bedlam has claimed the majority of the human population, and the only thing standing between the Fae and total domination is a man called The Iron King and cold forged iron.

They are put into the avatars of residents of Youngstown, OH or rather what remains of it. The daughter of the town mayor is set to be betrothed to The Iron King. Strangers known as The Wayfarer and Jack, apprentice of the one called The Blacksmith, arrive to help guide her on the journey but all plans are waylaid thanks to the arrival of a Fae envoy. The Duchess is coming and she has a request for the soon to be bride: to put on a collar of possession and bind herself to the fae.

The reason soon becomes clear. Gina can mold metal with her bare hands, and can create cold forged weapons at an incredible speed. Unfortunately, in an attempt to deceive the fae and escape to The Iron King, the group manage to insult the Duchess. She in turn attacks Youngstown with all her forces. A bitter fight breaks out, resulting in Ronald’s avatar of Jack losing his arm in the process (don’t worry he should be fine). The fae are finally driven back. They now need only survive until morning when the Wayfarer can find the path and take Gina on her way.