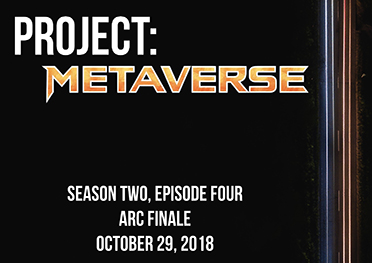 It’s Monday – that means it’s Metaverse Day! Join us tonight at 6PM PT for the second arc of PROJECT: METAVERSE, our original RPG livestream, exclusively on http://twitch.tv/zombieorpheus! PROJECT: METAVERSE ends its four week run tonight, with MASTERS OF THE METAVERSE returning next week.

Last Monday, the pilots travelled toward San Antonio and George Custer. John Hardin wakes up, this time with Brony back inside his body. From the roof, he hears the sounds of creaking and scratching. Waking the others, who are just as confused as he is about where he has been for the past four days, they find themselves confronting a creature that appears to be a werewolf of some sort. During this time, the team calls out for TOM, who doesn’t appear because he is inside of Andi’s body and can only be heard by her. TOM informs Brony that he was gone for a few seconds in the real world when his pod went offline. However, in the metaverse, several days of passed.

The team confronts the werewolf and manages to take him down, despite Billi/Andi attempting to ride him. However, when Billi goes to skin the beast, she finds the body of a man inside. Horrified, the team grapples with what this means about them and the creatures in this world. Finally, the decision is made to ride on to San Antonio to deliver the letter to George Custer. Along the way, TOM is able to answer some questions for the pilots. When asked why he is currently inside of Andi, TOM states that it is likely the work of “them”, “them” being a part of the metaverse known as CHAT. The pilots are making “a lot of noise” as they travel through these worlds which the Metaverse doesn’t always like. When that happens, CHAT tends to make strange things occur. On reaching San Antonio, the group does some scouting and learn several important pieces of information.

First, there is a Wendy Gates in this world, and she is the personal assistant of Samuel Clemmons. Second, there is a poker tournament being held by George Custer in a few days, but it requires a $10,000 buy in. George Custer is also holding a party the next evening and will be in attendance himself. Finally, a man by the name of Robert Ford is present in town – the man that killed Jesse James’ brother.

TOM and Andi get drunk while the others make plans to go in search of ways to make money in order to enter the poker contest. Jesse takes Billi/TOM up to bed as Doc and John confront a group of men who were talking about a lost ship of treasure in the Medina Gorge. As the remaining three outlaws make plans, upstairs Billi/TOM plot a little bank heist of their own.

This week is the epic finale of Project: Metaverse and you do not want to miss this! Tune in at 6pm PT on http://twitch.tv/zombieorpheus to see what happens next!