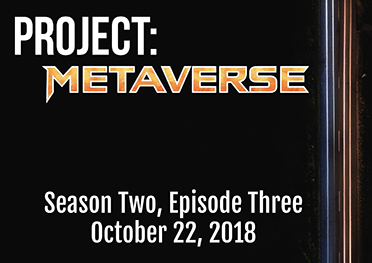 Last Monday, the outlaws are awakened to find themselves surrounded by Sheriff Pat Garrett and her posse with no sign of John Hardin. Pat rounds everyone up and they head off to see the President of Free Texas, Samuel Clemmons. As they travel, they come upon a small town that is filled with the sound of gunfire. As Pat and her men go to investigate, Jesse James notices some small, demonic looking purple people eaters climbing over the rooftops. She, Billi, and Doc engage with these new foes as John appears from a side alley – and promptly shoots the four men guarding his friends.

As the battle with the ghouls rages on, it becomes clear that the blood oath taken by Doc Holiday isn’t as straight forward as previously thought: he doesn’t appear to be bleeding, no matter how many times he is bitten. John Hardin is revealed to be TOM, who is piloting in Brony’s absence. Power fluctuations have taken his pod offline, whom TOM is filling in for while he’s gone. Unfortunately, TOM is fully immersed in the avatar of John Hardin and has no way of moving himself out of it – which means John’s murder spree might only be just beginning.

After dispatching the ghouls, the team finally make their way to the camp of Samuel Clemmons. He has received word from King Teddy to be one the lookout for our four outlaws, but has not yet decided whether he is willing to do so. He tells them to rest for the evening and they will speak more in the morning.

That night, the group gets drunk in order to avoid letting John get hold of the bottle. Hearing some noises from outside, John goes to investigate and finds Samuel Clemmons under attack from several vampires. A little worse for wear after drinking, the outlaws are able to defend the president of Texas and eliminate the vampires. It seems that necromancers have taken up residence to the south are are sending their unholy fiends against Clemmons and the fleeing refugees. Samuel has an offer for the team: take a letter to one George Custer and ask him for assistance in this conflict. In return, Clemmons will pretend to have never seen the outlaws, who are then free to ride east as far as they can. This works out just fine for Doc, who happens to have a bone to pick with Custer, and for Billi, who is planning on robbing the Alamo. And according to TOM, the Alamo is the key to getting to the next metaverse.

Will the group meet George Custer? What secrets does the Alamo hold? Tune in at 6pm PT on http://twitch.tv/zombieorpheus to see what happens next!