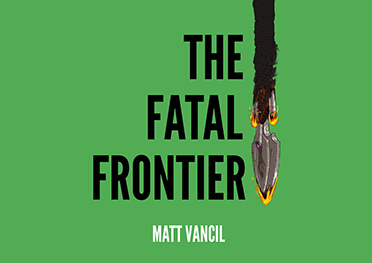 Hail, Zoeites! I come before you today seeking your aid. I offer this head of Chibichan in tribute; long may it please you.

I am nearing the end of the Kickstarter for a new novel, The Fatal Frontier, a story I’ve had on the backburner since grad school. Elevator pitch: it’s a trek through the stars, but one infected by late-stage capitalism. The project’s trajectory is good: 2/3 of the way through the campaign, we’re 2/3 funded. If you can math good, you’ll see those map pretty well onto one another, and we may very well hit our target. But only if we maintain this momentum. And should we exceed the goal, our first stretch goal is hiring Brian Lewis to record the audio book of the novel since his voice is made of distilled sex and honey.

It’s the future! And it sucks. We’re trekking our way through the stars, but we packed our societal baggage for the trip. Sure, we live in massive AI-driven starships filled with highly-skilled crew in colorful jumpsuits. But this is no currency-free utopia with the betterment of the species in mind — we’ve commodified space. We’re strip mining planets to build wealth for shareholders. The great starships themselves are basically a company town, designed to optimize profits while keeping its laborers in perpetual debt. So, you know. Nothing like today. The officers’ comm badge. Motto: “To the Stars, Our Birthright”

If you weren’t born into the officer caste, your prospects for advancement aren’t great — doubly so if you’re wearing a red crew shirt. While the officers always seem to come through any mission unscathed, the butcher’s bill for the red shirts is usually pretty ghastly. The officers use them like bullets, firing great volleys of them at a problem until it drops. And as much as the red shirts may grumble and complain and mutter about mutiny, they’ve got no real power. Not with the heavily-armed security force between them and the officers. Not to mention that semi-omniscient AI watching their every move.

So you’ve got rot at the top, unrest at the bottom, and militarized police in between — a house of powder kegs, just waiting for the right match to kick it over. Shut up, the metaphor works. And, of course, that keg-kicking match is well on its way, in the form of an alien threat like none we’ve ever seen. Literally — all intelligent aliens we’ve met look pretty much like us, which has led to the (wrong) conclusion that space is anthropomorphic and predictable. That notion — along with the ship and its oppressive social structure — are about to go down in flames.

This is a comedy, by the way.

You can download the preview chapter as an ebook or PDF on the Kickstarter page. We’ve recently uploaded the art for the enamel pins (pictured above). Also, at popular request, we’ve created an all-electronic reward level: the Technician, which gets you the audio book and ebook in the format of your choice (and no shipping costs!).

Please swing on by! It would melt a theorem down. Er…sorry. I meant it would detonate worm helm. FRIGGIN! *sigh* It would mean the world to me. Apologies. The Anagram Cannon’s been getting a lot of action and I fear the contamination’s spread.