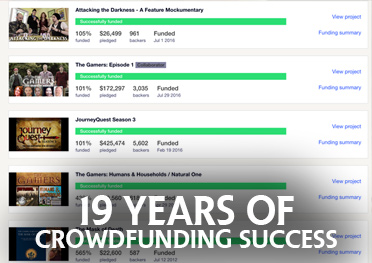 Crowdfunding became a popular method of independent financing in the early 2010s thanks to websites such as IndieGoGo and Kickstarter.

Dead Gentlemen and Zombie Orpheus were trailblazers for crowdfunding with a history stretching back to the earliest days of the modern internet.

Starting in 1998, the group who become Dead Gentlemen Productions raised $3000 in fan fundraising to help offset the estimated $5000 budget for their first feature film, Demon Hunters. Dead Gentlemen and Zombie Orpheus once again turned to fans to finance the production costs of the completed first season of JourneyQuest in 2010 through a contribution drive on their website coinciding with the show’s premiere on YouTube. Fans reached the funding goal of $30,000, and this paved the way for a traditional Kickstarter campaign for season two of the show.

Since then, Zombie Orpheus (ZOE) and Dead Gentlemen (DG) have been involved in twelve crowdfunding efforts directly funding different projects and releases. These include:

JourneyQuest Season Two (ZOE) This project funded the production of the second season of JourneyQuest, the fantasy-comedy series from Zombie Orpheus. Completed on November 26, 2011, successfully raising $113,028 from 1,117 backers on a $60,000 goal.

Mask of Death (ZOE)A roleplaying game module (a pre-written adventure for an RPG with all maps and statistics included) based on the adventure used in The Gamers: Dorkness Rising, available in printed and eBook format. Completed on July 13, 2012, successfully raising $22,600 from 587 backers on a $4,000 goal.

The Gamers: Hands of Fate (ZOE & DG)The third film in the Gamers series, this project also included a stretch goal for a game based on the Romance of the Nine Empires card game from the film produced by Alderac Entertainment Group. Completed on September 7, 2012, successfully raising $405,916 from 4,311 backers on a $320,000 goal. At the time this Kickstarter ended, it was the highest funded narrative feature Kickstarter.

The Gamers: Natural One and Humans & Households (ZOE & Lynnvander)This Kickstarter funded two short film productions from Zombie Orpheus. The Gamers: Natural One was a spin-off of the Gamers film series focusing on new characters and exploring a different gaming genre, a mixture of urban fantasy and cyberpunk science fiction. Humans & Households was a self-parody of the format of The Gamers where a standard fantasy adventuring party of a wizard, thief, warrior, and cleric got together to play a roleplaying game, taking on the roles of everyday normal humans in a modern world. Completed on April 29, 2013, successfully raising $30,560 from 818 backers on a $7,000 goal.

House Rulez (DG)A parody of reality television, House Rulez turned the hidden cameras on the production staff to observe their methodology of shooting a reality TV show and the hijinks that ensued (the phrase “the statute of limitations has finally expired” was used in the Kickstarter page). Completed on August 8, 2014, successfully raising $17,370 from 444 backers on a $15,000 goal.

Pilot Season This project was to fund ten minute pilots for four different series. The Gamers: The Series would be a direct sequel to the original The Gamers film bringing in elements from all films in the series, Demon Hunters: Red Tape would be a sequel to the original Demon Hunters films with a focus on the day-to-day office issues of running a secret supernatural-fighting task force, BRASS would be a steampunk mystery-adventure series with both live-action and radio drama elements, and The Mirror Game would be a Lovecraftian-style horror about a child’s game of speaking into a mirror to open a portal to the Great Old Ones. Though it had 777 backers, this project did not fund its $150,000 goal and was cancelled on May 12, 2015. Some of these projects were later brought back through their own individual crowdfunding efforts.

The Gamers: Natural 20 and the Cyber:Run Board Game (DG & Lynnvander) A sequel to The Gamers: Natural One, this film would continue the story of cyberpunk and fantasy as well as produce a board game based on the original short’s fictional roleplaying game Cyber:Run. Funding for this project was cancelled on November 1, 2015 as the 494 backers fell short of the $120,000 goal.

JourneyQuest Season 3 (ZOE) This projected funded production on the third season of the JourneyQuest fantasy-comedy series from Zombie Orpheus. Completed on February 19, 2016, successfully raising $425,474 from 5,602 backers on a $420,000 goal.

Attacking the Darkness (ZOE)A behind-the-scenes spin-off of the feature film Dark Dungeons, the only officially licensed film adaptation of the Chick Tracts from Christian writer/artist Jack Chick. The original film was funded by producer JR Ralls in a Kickstarter campaign of its own (raising $25,287 from 849 backers). This look behind the scenes of a production like Dark Dungeons followed fellow producers Harmony Hope and Brady Bryant as they attempted to bring their anti-RPG vision to the holy light. Completed on July 1, 2016, successfully raising $26,499 with 961 backers on a $25,000 goal.

The Gamers: Episode 1 The Shadow Menace (ZOE & DG)The first ongoing series in the Gamers series, this project funded the pilot episode of what became a four-part series as a direct sequel to the original The Gamers film, exploring the fates of the main characters from that film leading through the events of the other stories in the Gamers series. Completed on July 29, 2016, successfully raising $172,297 from 3,035 backers on a $170,000 goal.

The Strowlers Preludes (ZOE)An ambitious open shared-world series told though multiple media, The Strowlers Preludes sets the stage for a wide array of stories to come. Set in a world where magic is real but strictly controlled by the government, Strowlers funded production at sites across the world with filming in Seattle, Ireland, and Mongolia. The project also funded a world bible for the series, allowing backers to have access to the plot and worldbuilding elements of Strowlers in order to create their own canonical works in this shared universe. Completed on February 24, 2017, successfully raising $23,791 from 421 backers on a $12,000 goal.

Demon Hunters: Slice of Life The sequel/spin-off to the Demon Hunters films, this film focuses on the day-to-day life of those whose job it is to protect the world from supernatural evil. Completed on May 19, 2017, successfully raising $38,644 from 676 backers on a $33,000 goal.

In addition to crowdfunding efforts for specific projects, Zombie Orpheus helped pioneer crowdfunding subscription services with the launch of Phase II in 2013. This service allowed fans to directly fund the production efforts of Zombie Orpheus and receive exclusive content in exchange and other rewards for supporting the creators. In 2014, Zombie Orpheus moved the Phase II platform to the newly launched Patreon website where they (as of May 2017) have 899 patrons contributing $5,747 per month.

Because of these crowdfunding efforts and direct fan support, Zombie Orpheus can to give back to their fans in ways that other productions can’t. ZOE releases all their content under the Creative Commons license (specifically BY-SA-NC), a limited distribution license that allows anyone to download, upload, share, remix, or create derivative works including fanfiction, art, music video tributes, fan films, and more, so long as the original creators are credited and the content is not used for commercial purposes. Because of fan support and the lack of outside control over projects, Zombie Orpheus is able to make sure that fans have access to their content regardless of what platform or medium they want to use.