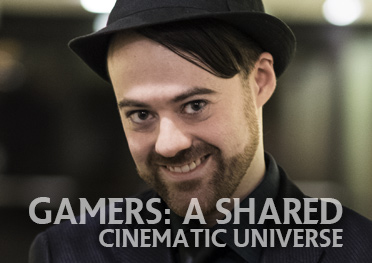 The term “cinematic universe” came into vogue in Hollywood circles following the success of the Marvel comic book adaptations, and since then, studios have chased after the success found in independent-but-linked films and television. From a marketing perspective, it’s a perfect storm. Each project in a shared universe promotes all the others, but allows a studio to change out genre, actors, directors, and writers as necessary by scheduling and salary demands.

However, the concept isn’t as new as many think. A group of filmmakers created a cinematic universe stretching back almost two decades, produced independently and distributed online even before YouTube and Netflix streamed their first videos.

The Gamers, released in 2002, is a straightforward comedy about a tabletop roleplaying group. Unlike many contemporary presentations of gaming in media, The Gamers showed a true love and understanding of gaming and those who play games. The film’s comedy came not only from the translation of the players’ choices filtered through the game rules and into the fantasy world where their characters lived, but also from the interactions between the players. Many of the situations felt familiar to anyone who has ever picked up a set of polyhedral dice to cast a fireball, and led to the start of a cult following.

The sequel, The Gamers: Dorkness Rising, marked the first exposure audiences had to connects between films in this shared universe. Completed in 2006 and released in 2008, the film featured different characters than the original and had a greater focus on the relationships between the players outside of the game table. While it would have been easy to simply use the name recognition of the original film, the creators put forth the effort to tie the worlds together with many thematic references, callbacks, and even a cameo from one of the original characters.

Over the years, the universe expanded as more films joined the first two. The Gamers: Hands of Fate, a direct sequel to Dorkness Rising released in 2013, starred the same characters and continued the story elements from that film. Also released in 2013, the short film The Gamers: Natural One brought in a new set of characters and explored a new gaming genre, this one the mixture of urban fantasy and cyberpunk popularized by the tabletop game Shadowrun. However, many characters from Dorkness Rising made an appearance in this short as well. It wasn’t until well over a decade later that fans would get a proper sequel to the original The Gamers with The Gamers: The Series in 2015, which updated audiences on what the main characters from that story did in the intervening years, and The Gamers: The Shadow Menace in 2017, which continued the story with a brand new adventure featuring many new and returning characters.

However, there’s more to this universe than just The Gamers. Each of the creations of writer Matt Vancil take place in a multiverse setting known as “The Hopjockey Universe”, fully detailed in his upcoming novel Hopjockey. The novel ties together other projects such as Demon Hunters, about a secret organization fighting supernatural threats to modern-day earth; JourneyQuest, a straight fantasy-comedy that doesn’t include any direct tabletop gaming elements or references; and Humans & Households, a self-parody of the Gamers format where a standard fantasy adventuring party plays a roleplaying game where they take on the roles of normal people in the modern world, facing such challenges as “crossing the street” and “housesitting”.

Combined together, these works create a multiverse spanning almost twenty years of productions in different media, including six feature films, five webseries seasons, three short films, a novel, roleplaying game supplements, a live improvisational show, and more. The creators at Zombie Orpheus and Dead Gentlemen accomplished this feat without studio backing, self-producing and self-distributing all the projects themselves with funding directly from their fans.