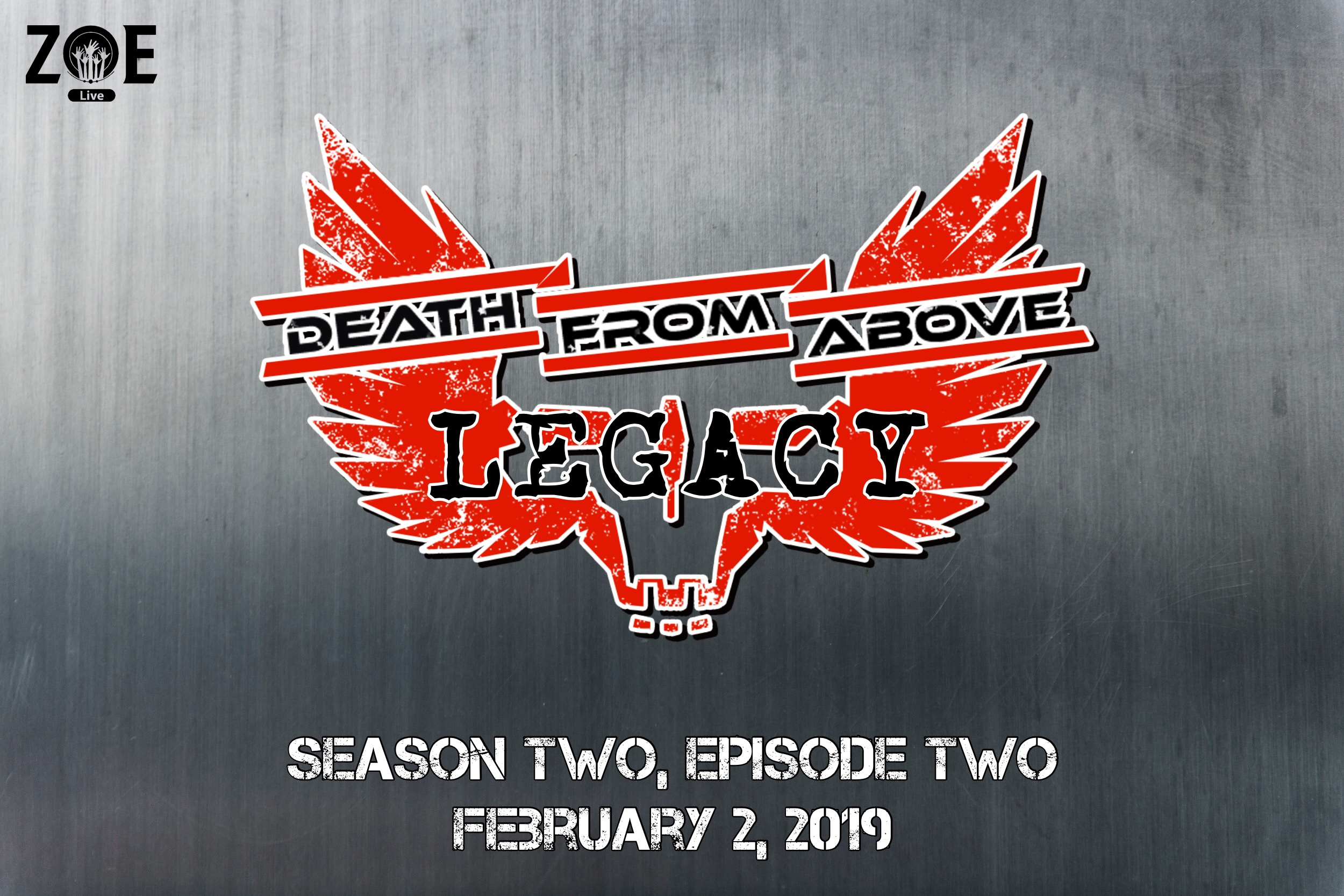 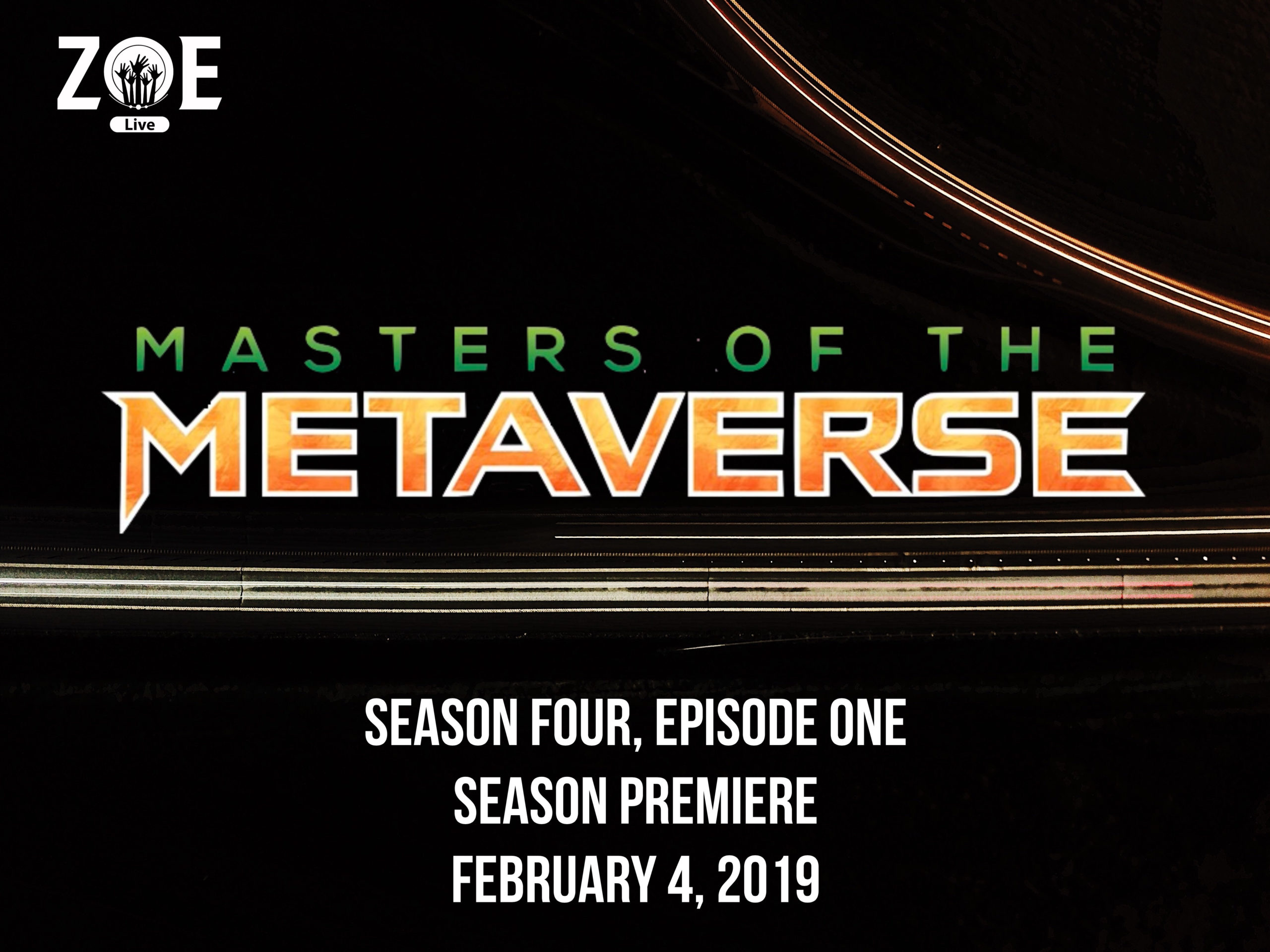 Hello ZOE Fans! It’s a new week and we have some awesome shows coming to you from the ZOE Twitch Channel which can be found at http://twitch.tv/zombieorpheus

First up is Death From Above on Saturday, February 2nd at 1pm PT! This is our Battletech Inspired RPG which has just kicked off it’s brand new season so it is the PERFECT time to jump in! Last week we jumped back to the past to see how our team first came together…who knows where or when we will be this week? Join cast members Matt Shimkus, Sarah Sanders-Ode, Kesan Holt, Tammy Nguyen, BJ Altman, Chris Ode, and Steve Wolbrecht as we embark on another episode of stompy mech action!

Then it’s Monday, February 4th and that means it’s Metaverse Day! Tonight at 6pm PT is the Season Four Premiere of Masters Of The Metaverse, our original live streamed RPG, exclusively on http://twitch.tv/zombieorpheus! A new season means new worlds, new avatars, and a complete recap!

Last time, the crew of Galaxy Tails finally confronted Admiral Sliss over the mysterious object, and Crash made a decision that will impact worlds…

Fred the Giant Space Squid opens his mouth and gently releases the Armadillo, unharmed. Kitt thanks his friend and poker buddy for helping them, and requests that Fred covers their escape with some space ink. Fred obliges and the crew race off back to the Planet Dojo. While North and Presto attempt to discover more information about the mysterious object, Kitt and Sojourn get down to business to defeat the other Tai Kwon Slow apprentices at the tournament. As they travel, Kitt becomes more and more confused and disillusioned with his animated existence…as his body becomes more and more real. Suddenly everything goes blue and a woman’s voice comes from nowhere saying “We are currently experiencing technical difficulties. Please contact your service provider for more information.” The blue fades and the Armadillo arrives on Planet Dojo. Kitt fights the other apprentices with increasingly disturbing results. Wherever his real parts touch, the animated world is torn apart. The crowd is also being impacted as they are becoming more confused with each passing moment, as are Sojourn, Presto, and North. A great tear opens up in the world and The Destroyer, a giant space worm (yes, a space worm), crashes through the scene. North convinces Presto to fly the ship back to rescue Kits and Sojourn…just in time for him to fly it directly into a large hole that Kitt just created with his real hands. Trapped under the space worm, North deploys the tail spear and Presto skewers the worm, rescuing Kitt. Sojourn is pulled from the mouth of the worm by Kitt, and the crew races off as a new hole opens up and mosquito men begin pouring out. Thomas and Jenika move away from their avatars and relay to the others that the item is a part of the Titan Matrix. It bears the logo of Kid Titan and it is currently empty. What’s worse? The crack was there well before the Galaxy Tails crew ever found it. Which means that someone else has part of the Titan Matrix aside from Kitt, who is now completely real except for his head. Crash realizes that Admiral Sliss must have the other half and the Armadillo heads off for their final confrontation. Inside the hangar of the Chameleon Empire vessel, Admiral Sliss is revealed to be completely real, except for his tail. A fight breaks out and as Thomas uses the weapons on the smaller space craft to annihilate the other Chameleon Empire officers, Sliss uses his ultra vision on Kitt. When the smoke clear, Kitt is still there but he is now clothed in pieces of Kid Titan’s old costume. Crash devises a plan to make Admiral Sliss tell them how he got his power in the first place and convinces the others to play dead. Sliss monologues and tells them everything, which gives Crash an opening. He tells Sliss that he can’t have the true power of the Titan Matrix unless he activates it and takes the oath. Sliss begins to do so but Crash interrupts him saying “I accept!” The power of the Titan Matrix flows into Crash and destroys Sliss. Reeling from these developments, the others are stunned when Crash tells them his plan for saving all of Mammalon Prime. He divides the Titan Matrix among them all and using their combined powers of a dome is created to keep all the worlds of Mammalon Prime safe. Disturbed by what has happened and what it means for the future of their time in the Metaverse, the pilots return to the real world. Crash is sleeping soundly while Thomas is nowhere to be seen. Bruno lies on a bed nearby, badly wounded. Nick lays on another bed, awake and in a new body. And somewhere between this world and the Metaverse Thomas meets a man in a Hawaiian shirt…

Who knows where GM Christian Doyle will take us this time! Tune in at 6pm PT on February 4th onhttp://twitch.tv/zombieorpheus to see what happens!

We hope you can tune in to watch all these amazing shows live or catch them on the VOD, either on Twitch or on the ZOE Live YouTube Channel! It’s going to be a great week!