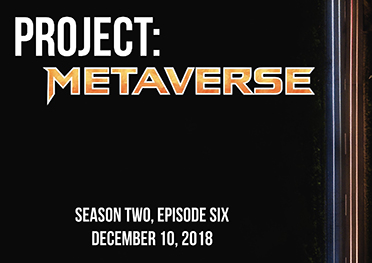 It’s Monday – that means it’s Metaverse Day! Join us tonight at 6PM PT as we continue with PROJECT: METAVERSE, our original RPG livestream, exclusively on http://twitch.tv/zombieorpheus!

Last Monday, the pilots found themselves in a world unlike any they had experienced before. As three children lost in time, Bobby, Angel, and Lizzie wake up outside the inviting grounds of an amusement park. The admission is free, and they are soon enjoying the food and games awaiting them inside.

Angel, the self-proclaimed Queen of Fairyland, appears to be straight out of the 1920s. Bobby is a little boy from the 1950s, armed with his wooden gun and a wealth of military history knowledge. Lizzie seems to be from the 1970s or 1980s and has no time or patience for childish things like magic and pretend. She takes care of herself and is armed with a slingshot, a switchblade, and several very sticky fingers.

The trio make their way through the abandoned park, beginning to notice that things are not quite what they seem. They come upon a pink and white tropical flower in a blue pot with a note. The note is from someone they don’t know, someone named TOM. TOM claims that they are in danger and he is trying to reach them in time. He implores them to work together and stay safe. Suddenly, darkness falls, and the previously welcoming scene becomes far more sinister. Stuffed animals come grotesquely to life and begin attacking the children, while the food Lizzie previously ate isn’t sitting so well with her. Bobby and Angel find that their previously imaginary tools now work with spectacular results. The children run away and stumble into the food court.

Another flower and note are waiting for them. Lizzie begins to vomit as Bobby reads the note. TOM is trying to reach them, but he has discovered that they are in a world that is both a metaverse and yet not one, and this world is controlled by a highly intelligent and sinister being. He tells the children to find a place to hide and wait until morning. They crowd into an unused refrigeration unit in the ice cream stand and wait until the sun rises.

Stumbling out into the light, they find that the world is as it was when they first arrived, with no sign of the horrors from the night before. A random system shock sends the children back toward the pilot side and Wyatt, Maddox, and Andi try to piece together what is happening to them – and where Brony has disappeared to. Andi uses her magic from Angel to try and summon TOM from his flower but only manages to create a tiny bobble-head version. Maddox places him in her backpack and they head off, as darkness begins to fall once again. They spot a small boy running off toward the fun house and give chase. Once inside the building, night truly falls – and Maddox is separated from the group. Andi comes upon the boy who tells her that “he” is coming, before looking up to reveal two bloody holes where his eyes once were.

The trio reunites and is thrilled to discover that TOM has found a way to communicate with them via the bobblehead. He is even able to send them two loot boxes containing a hand break and a mirror. These items come in handy as the children find themselves in a mining car heading down the tracks as a tentacled monster attempts to sweep them overboard. Finally emerging from the fun house, the group is horrified to see that they have stumbled into a freak show.

Andi uses her super speed to pull them closer to the exit but the floor begins to give way like wet cement, trapping them. They begin to fight the performers, but things seem off. One of the attackers almost appears apologetic to them, and a glance in the mirror from TOM reveals that all the side show performers are being controlled like marionettes. Maddox burns away some of the strings, and Wyatt discovers the power of an imaginary machine gun. They make their way out of the side show of horrors but they are far from safe – and far from home.

What horrors does Toyland have in store for the team this week?