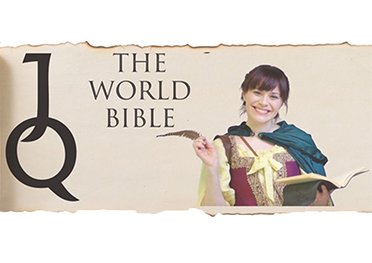 As part of the JourneyQuest 3.5 Kickstarter, we are launching the Fartherall World Bible! The World Bible will not only go into great detail about each age of Fartherall, but also provide you with material so you can create your OWN campaigns within the world. At certain pledge levels, not only do you gain access to the World Bible, but you will be able to create your own hero or demi-god of Fartherall. That’s right – you get to become a part of Fatherall.

Matt Vancil recently gave us some new, more detailed, information on the World Bible and we wanted to share it with you:
I think “world bible” might not be painting a complete enough picture of what this book will contain. Like with Strowlers, the Fartherall World Bible will provide guidelines for folks interested in creating their own works of fiction set in the world of JourneyQuest and the Gamers movies, stories, whatever tales you want to tell. But that is only one of the functions this book will serve. A better title might be The Fartherall Companion. Think of it as a system agnostic campaign setting. It’s a complete history of Fartherall, stretching from its emergence in the Non-Age before Creation to the (non-spoilery) end of all things in the Age of Dust, with detailed write ups of the prominent peoples, organizations, and events of every age — everything you and your gaming group could possibly need to create your own personal JourneyQuest — all the world’s secrets, laid bare. Without spoiling the series, of course.

Want to know how the Bard’s College or Wizardium came to be? How the Wicked Kings seized power? The link between Fartherall and Countermay? How magic works, why the elves aren’t there in the Fifth Age, why the orcs weren’t in the Third, and when the Ord return? Any why? And how? Because this book will cover it — all of it, the entirety of fiction set in the world of JQ and the Gamers, with a more-than-fleeting glimpse at the wider Hopjockey universe beyond. Which is where I expect I’ll be turning my storytelling energy once JourneyQuest is complete. And what you’ll see — in this book, and after the conclusion of the series in JQ5 — is how it all. Ties. Together. JourneyQuest, Gamers, Hopjockey, Countermay…all of it. And how we’ve had it planned that way since…well. We’ll show you if you let us. Here’s a sampler of sections planned for the book, some of which are stretch goals:

This is the only time I expect to do this deep a dive into the world as a whole, so if you want to see it happen — and to make your own creative stamp on it, as some of the reward levels allow— we have eleven days to make it a reality. Hope to see you there.