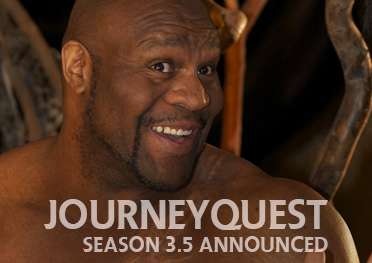 Despite our best efforts, there are pieces of the JourneyQuest story that have ended up on the cutting room floor…and it’s about to happen again as we move into production on Seasons 4 & 5.

But with your help we can not only tell the entire story, but set up JQ4 and JQ5 to be even more epic!

Sign up now to be the first to hear when the campaign begins!

This campaign is going to be something special.

Here’s a preview of everything we’re planning!

Just like one of our favorite roleplaying games, this is where we make some important fixes and upgrades. It’s where we catch up with moments that we couldn’t afford to shoot for seasons 2 and 3 and preemptively shoot what we would otherwise have to cut from Seasons 4 and 5.

Scenes vital to the overall story arc of JourneyQuest.

Ever wonder why the Orcs in Season 3 were randomly in the woods at the beginning? Where did the Orcs go when they used Silver Tom’s “magic device”? Where is Karn? How did Perf get into wizarding school?

Completing these story arcs are important because you, the fans, the lifeblood of JourneyQuest, deserve to see the entire story from beginning to end without cuts.

This campaign will also allow us to “shoot out” existing locations in the Seattle/Tacoma area. We’ll return to Carkeek Park and the Disc Golf course and elsewhere to finish key moments from the beginning of Season 4. We’ll shoot the next moments with Carrow and Nara. We’ll return briefly to a certain mining town, where [spoilers] decides to [spoiler].

And THAT gives us the option to travel for Seasons 4 & 5! Especially given what we learned from recent Strowlers shoots in Ireland and Mongolia, we now have the experience to visit and shoot at some amazing locations…as long as we’re not stuck in Seattle/Tacoma for several crucial scenes.

This Kickstarter also includes stretch goals to turn the basic world bible into a gorgeous coffee table book, with full-color illustrations and a half-dozen extra chapters.

We’re trying something new and exciting with this campaign: Matt Vancil will run a canon tabletop adventure, featuring Christian Doyle as Perf, directly on Kickstarter Live…

…and your Kickstarter pledges will be able to affect the story in real time!

The SCHEDULE for this live events will appear on this page soon.

Plus, these adventures will be available exclusively afterwards on your Season 3.5 DVD or Blu-ray AND on The Fantasy Network!

This campaign is your opportunity to write yourself into the official history of Fartherall! Pledges of $100 and up will create official Fatherall Heroes, who will appear in the book AND be commemorated on unique, etched metal cards.

That’s not enough for a hero of your caliber? Why not be a demigod? Or create an organization? Or a kingdom?

Plus, backers at $1000 and higher will have the opportunity to appear on screen in the Bard College as your official Fartherall hero!

We’re keeping it awesome for our lower-level backers as well, with the DISC at $30, the softcover BIBLE at $50, and a month of access to The Fantasy Network at only $10, where you can stream JQ 3.5 first, along with dozens of your favorite indie fantasy shows and movies!

And finally, all pledges will affect the story in real-time during our tabletop livestreams. You’ll not only be getting awesome rewards when we ship, but instant gratification during our streams.

Our goal is to Kickstart Season 4 in January or February of 2019. Season 3.5 will begin our pre-production process, allowing us to move quickly to turn around and get Season 4 going.

But…if we can fund Season 4 during this campaign, we’ll get started even sooner!

Season 3.5 is slated to shoot in November of 2018, ideally completing all of our Seattle/Tacoma shots, then Season 4 would shoot in early 2019, even sooner than if we have to run a separate campaign!

Either way, we’re excited to tell the complete story, thanks to your support.

JourneyQuest is Creator Distributed and Fan Supported and we look forward to accomplishing the entire epic, together.

See you on September 21st!